So, transportation did not have a significant carbon footprint, but what about for the entire production process?

According to research done by Nike on the sustainability of their shoes, shipping to their distribution centers only accounts for 7% of their carbon emissions. 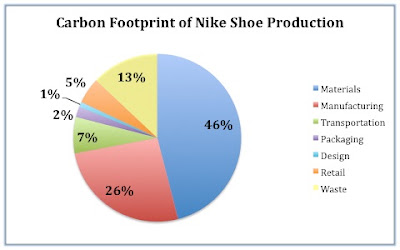 
How does this compare to the carbon footprint of other companies' shoe production?

Compared to Nike, TOMS shoes emits 3 times less carbon dioxide than a pair of Nike's, which produces ~42lbs of carbon dioxide. This is most likely associated with the fact that
1. Nike has many more factories and places from which they manufacture and acquire their materials. Thus, their shoes travel longer distances.
2. Nike utilizes both ocean and air freight transportation. Since air travel produces more carbon dioxide per mile than ocean transportation, using both for transport would increase their carbon emissions.

Overall, TOMS shoes appear to be an environmentally friendly choice for those in the lookout for a new pair of shoes.
Posted by jinhlee2 at 9:43 PM

Email ThisBlogThis!Share to TwitterShare to FacebookShare to Pinterest
Labels: Midterm